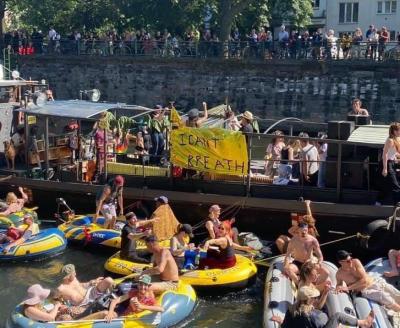 Clubs and Festivals Are Coming Back, But Where’s the Industry’s Fight Against Racism?

Last summer the Berlin image of white people partying beneath an “I can’t breathe” sign, George Floyd’s last words before he was killed by a cop, defines so much more than a ‘tone deaf’ reaction to that specific political climate but defines white people’s preference for an abstract engagement with racism, a kind of engagement that’s temporary that they hope to forget. Black squares and antiracism infographics were in abundance last summer, but that’s the only thing that was in abundance: responsibility, accountability, and any active changes were certainly not.

I’m not that cynical, believe it or not. I do think that last summer had a profound effect on a lot of people and I’ve seen some shift in consciousness. I’m not without hope, but this is beyond hope and optimism. There’s so much pressure to appear grateful; not wanting to be branded as a killjoy for fear of how that can affect your opportunities. This in itself, reveals the chokehold the industry has over people. To be clear the industry, for me at least, is defined as venues/festivals, agencies, press, and artists. So what’s needed is bigger than a few people making changes. We need drastic structural change in a system that’s overwhelmingly benefited white artists and sidelined others, especially Black artists.

This industry has been impervious to change, boastfully impervious to change, which has its dissenters labeled as haters, the woke police, and anti-PLUR. There’s no better way to avoid accountability than by promoting platitudes that brand yourself as so full of love that you couldn’t possibly have space for hate. I mean I found love on the Berghain dancefloor, I literally did, so it’s not as if it’s absent from the rave but falsely promoted and paraded as if it’s the heart of the operation. The following Berghain visit had me and two of my Black women friends accosted by a white woman with braids who said, “we’re in the same gang!”

This industry branding has been so successful in terms of its pervasiveness, it’s anti-political stance is so normalized that even Paula Temple’s 2015 RA mix was characterized as being different, “in a usually apolitical scene, Paula Temple’s understated engagement feels refreshing”, politics have been continually normalized as peripheral to the industry. So if we think about Paula Temple, a very successful white woman producer, is softly analyzed as somehow deferring from the norm it helps us understand the venom to which is spewed at those who actually ask for material change. Politics and music have been intentionally divided as a means to focus on profit and not progress, and magazines, agencies, promoters, festivals, and artists have knowingly and unknowingly kept that intention afloat. I remember Discwoman’s first print feature in DJ Mag excitedly opening the page to discover the piece’s title “Chicks with Discs”, laughably horrendous but intentionally positing us as ‘different’ from the normal white cis men noise. Women who DJ were an anomaly, leaving us to fight outside of a system that occasionally lets us in.

There is no sufficient accountability or repercussions in place for people who’ve been racist, homophobic, transphobic, misogynistic, but who is respoinsble for holding these people accountable? It’s often left to those who have been affected by the action and less than rarely ever tackled by those with more industry power. When a white artist, “rocked” braids people rightfully criticized her, myself included. I suggested she read to become more informed about the criticism to which she responded “you are a racist Frankie”. I can’t type that without laughing now, but it is a perfect example of how those with power deflect and refuse to engage productively but have no effect on their opportunities. Or a white person who described marginalized artists asking for money as “disgusting” but in turn played “plague raves'' and is now booked at festivals this summer. Or a white artist who called me aggressive, but will likely never experience an issue with being booked as their privilege outweighs and overpowers anything else. Who in this industry wants to face and deal with these issues, furthermore wants to believe them? There is no justice for these behaviours. There are countless examples of this kind of escalation: the “be-offensive-but-get-more-gigs” pipeline, look at any line-up. They’ve built up the strongest immunity so will likely never experience any symptoms in regards to their actions.

It's hard to know what to do when you’ve been treated poorly by white peers as there’s no infrastructure to support you let alone believe you. Our experiences can be so nuanced, that unless someone has called you a nigger in writing, there’s little hope in your experience being heard or dealt with. This is an isolating experience, which is precisely a function of white supremacy: to distance you from any support by undermining your experience.

We are currently at this anxiety-inducing point where festivals are being announced, scouring line ups for praxis, to see if anyone has listened or did the reading. The industry’s normalization of an “apolitical” space has prevailed and persisted relentlessly and last summer represented a lot of hope for Black artists in fracturing that. Hope that this would resonate with people beyond a social post. Hope that white artists would begin to stand up for their Black peers. Hope that white people would begin to take action on the inarguable industry inequity, an industry that upholds conservatism and stagnates progress. The outcry I have seen in response to line-ups is “ I can’t believe plague rave djs are playing” rather than “why aren’t any Black artists booked”, which is two sides of the same coin but there’s definitely a hesitation in framing this as a race issue.

With waves of clubs and festivals reopening, comes waves of anxiety and dread: the dread of the industry repeating itself and thus feeling at a loss. If last summer’s mass-Black-artist-unification cannot make a change, what can it take to do so? This question is definitely somewhat premature, as not nearly enough of nightlife has returned to give a fair assessment of this. However, what we have seen so far does not indicate much hope and confirms fears that history will indeed repeat itself. And quite literally actually, as many festivals have rebooked the same artists that were booked for their cancelled festival last year and to some extent I understand this position, you made a contract and you want to honor it.

But how radical of a move would it be for one of these festivals, in light of Black artists' protests and vulnerability, to delete that shit and start again, where can we find these kinds of guts? If festivals aren’t going to show any indication of change, then will white artists and their agencies call out the white line ups they're booked on, will they stand up for their Black peers and question the institutions that book them? I’ve seen countless white artists on these line ups, white artists of the black square brigade and zero white artists saying anything about the repetitive line ups and their access to opportunities. It's a depressing loop and this loop is precisely the issue.

The pandemic has taken away nightlife but intensified its need to profit, and like we see with all profit turning things: it’s always at the expense of somebody else. Post-pandemic there’s either the option to collapse and rebuild or persevere and profit, taking into account that many clubs and festivals are in a state of panic so the latter is the safe option. But why is it assumed that your party can only profit booking the same artists, why is booking more Black artists insinuated as a risk? This assumption is racist. The fact that most people haven’t been raving for over a year, actually feels like a prime time to book outside of one’s comfort zone as people are just wanting to rave and be with each other above anything else.

The onus is always put on Black people to do something about their conditions, this is an exhausting reality. While the industry has been built on the exploitation of historically Black music, and the subjugation of Black artists, the pandemic provided a point of reflection and space to look at what’s wrong and try to make it right. Feelings of despair are compounded by the fact there’s been a great deal of space to commit to antiracism, there’s been ample room to explore how the current industry upholds white supremacy and the fear of that being met with nothing is extremely difficult to process.

It’s not lost on me that I’m Black and speaking on this, like many of us have to do, simply because the white industry- artists, festivals, and press alike, actively ignore this in hopes it goes away. But we’re not going anywhere and neither will the fight against racism.