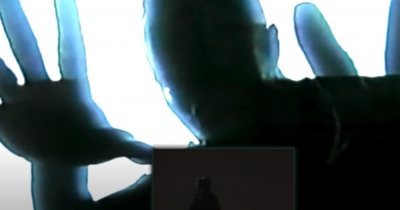 “Karma and Desire”, a short film accompaniment to Actress’ new record with the same name, begins with an unmanned camera capturing a mountainscape before cutting to an angel played by Yves Tumor in a 90’s era NYSE trader leather trench coat with angel wings takes in the vista from a balcony. Both parties are seemingly observing a woman, played by Zsela, walking alongside the coast well aware of the beings watching her plus the third party behind the fourth wall, us. Someone watching someone else as a core level is always a funny feeling and the film carries this feeling to the very end while quietly proposing questions about what it means to be seen, to be represented, and the right to be perceived on your own terms.

Directed by Lee Bootee, “Karma and Desire” goes to great lengths to get across the eerie feeling that is to merely be perceived whether it’s with or without consent. Every character in this film understands the degree to which they are being watched: flashlights, searchlights, bioscans, CCTV, Ring doorbells camera, handycams and drone photography are all used to convey surveillance of what is ostensibly just a woman who wants to be left alone to her seaside strolls and indoor gardens.

“Karma and Desire” reads more as a tone poem of the ills of modern surveillance, but there’s still a fair amount of plot in the 17 minute runtime. Zsela and Dark Angel Yves Tumor meet at an airstrip after both being followed (by us) to exchange a briefcase where in which Zsela dons the same financial broker winter coat as Tumor and begins to grow her own angel wings where they come together in the clouds by the end, refusing to be perceived in any way by blurring together into one black haze before it cuts to black. Credits roll.

For me, the more interesting pieces to dissect are the cinematographic choices in how this story gets from beginning to end. The drones pans following each subject at night with a flashlight shining from an unknown source, the shoulder cam following her through the in-between of shipping containers, the security cam in the elevator; the majority of what the main protagonist does is watch and get watched.

So much of the film reminded me of a legal framework proposed and put into practice by the European Union in 2006 known as “the right to be forgotten”. The right to be forgotten is the right to have private information from Internet Searches and other directories removed prompted by the desire of individuals “to determine the development of their life in an autonomous way, without being perpetually or periodically stigmatized as a consequence or a specific action performed in the past”.

The societal paradox the EU particularly faces (or faced due to Brexit) between this right and the mass amounts of surveillance that is well documented within the UK is discombobulating to say the least. There’s no room to be forgotten if ones analyzed face and routine movements are stored on state-run hard drives for god knows how long.

Another lens to see this short is through the Neo-liberal psychosis that has permeated into Black culture writ large conflating radicalism with representation. The idea that new heights can be reached for Black people by means of having our personas translated into AdSense dollars on social media or on street signs is a particularly dystopic form of the afrofuture. What power is gaining by being acknowledged by the powers that be from sunrise to sunset? A modern day Gil Scott-Heron might see all this and say, “I can’t pay no doctor bill, but Niggas on the Moon.”

A paper written by Silvano De la Llata in 2020, “Beyond representation. Overcoming the trap of representation through autonomous organization and prefigurative politics in the square movements'' encapsulates this idea firmly by stating that “refusing representation may paradoxically lead to new forms of representation”. Most representations orbit predominantly around The Aesthetic or that because there is a visual difference to contrast from the past so it's safe to assume structural change has occurred too. As we understand from time to time surrounding many Black people in power continue to pursue the same Draconian politics and choices that came before then, we simply cannot root for everybody Black but root for those that have our class and ideological interests at heart. So what if The Man' doesn't represent you? If he did, do you think he’d do a good job at it anyway? “Karma and Desire” answers this claim at the end a package arrives at Zsela house where upon opening it, the camera cuts to inside the package itself watching our protagonist; yet another camera. Zsela wraps the package back up and leaves it at the door before walking back in. The choice of refusing to keep being perceived by the unknown powers is chosen.

The only distinguishable lyrics from the entire film, including selections from the album featuring Aura T-09 and Sampha who both make their appearance, ask:

The film sounds like it’s answering the questions by telling you its desire; no you probably don’t and back up a little. By giving yourself more separation from trying to interpret, surveil, and/or be represented by others, you may have more time to learn about what it means to represent yourself for your own sake in the process. Instant karma.