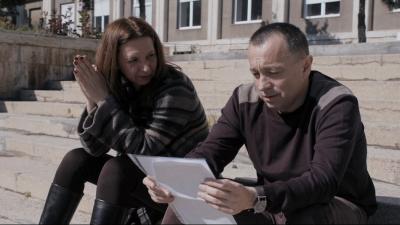 Some films I watched in May that I love and hate, enjoy.

Films that were great

This is thrilling. Spelling words in front of people competitively, as a viewer, is so stressful let alone the kids who actually have to compete. Spellbound follows 8 of the kids who are finalists in the National Spelling Championships, introducing us to each competitor, their family and school contexts. It’s impossible to not be invested in these kids. The doc goes beyond the Spelling Bee and illustrates, without being invasive, the driving factors behind why some of the families push their kids so hard exploring what it means to be Black, an immigrant, poor in the United States and how that impacts their relationship to the competition and their work ethic relative to the white American kids and their families.

It’s a fairly cynical portrait of how even children can be classist, how wealth has the ability to control the way a child treats another child. Being bullied as a child is such a universally relatable experience, and so regularly depicted in films that we’ve become used to a rather two-dimensional version of what bullying is. Whilst this film definitely centers one child, it offers empathy and understanding for the bullies too.

This shit takes you down such a disturbing rabbit hole, that reinstates your faith in journalism and the power it can have in holding governments accountable. This documentary tells the story of the Romanian nightclub Colectiv which burned down during a performance. This film interrogates why some of the victims, who should have survived considering their injuries, then died in the hospital. We discover that negligence and greed are at the heart of why that is, it relentlessly unfolds from one kind of corruption to another. It's a truly important piece of documentary filmmaking bursting with integrity, that other recent documentaries should take note of (see the film I hate below)

CONTENT WARNING: At the beginning it shows a disturbing video of the club burning from the inside, which I don't think was necessary but you should be prepared if you choose to view it. Suicide is also discussed, and there's some disturbing images shown of the hospital victims.

Shattered Glass tells the true story of Stephen Glass, a white dude Journalist at the New Republic who faked it till he made it, fabricating articles that were then published. When his editor starts to figure out he’s a fraud is when the film really picks up pace and it’s awkwardly fun watching him attempt to dig himself out of the mess of lies he’s created. But, for me at least, there’s also a bigger point being made here, which is how white men are given allowances and how much it takes for them to be condemned; illustrated by how difficult it is for the editor to convince everyone of Glass’ fraud.

Felt compelled to recommend this because of the amount of praise that Promising Young Woman is getting. Neither of these films are at all similar but I think if we’re going to discuss recent films that concern abusers and sexual assault, The Assistant illustrates this brilliantly without even giving a face to the abuser in question. Giving more space to the culture and environment around abusers, in this case an office, is far more effective in my opinion at understanding the power that abusers hold, especially those in senior positions. It avoids any gratuitous depictions of traumatic events in order to make a point, but rather hones in on the working environment and the visceral impact of that.

Films that were very off

I watched this because Roger Ebert put it on his Great Movie list and I love films that explore family dynamics but this film decided to hand the women characters babies instead of anything else like self-worth or love or care. SPOILER literally that’s the conclusion of the film every woman gets a baby. It was fucking weird lmao. There are some great parts, but ultimately fails due to how its women characters are treated.

SPOILER: There’s an awful scene where Rick Moranis’ character is trying to win back his wife (played by Harley Jane Kozak) after she threatens to leave because he’s so regimented with their daughter and neglects his relationship with his wife. But he manages to win her over by dramatically interrupting her while teaching a class and professing his love for her at work, where they kiss in front of her whole class. That is the last time we see them, the film doesn't bother to validate her concerns, it chooses to throw her whole empowerment storyline away.

Films that were bad

I’m so bothered by this documentary, it says absolutely nothing. OMG, a corporation named WeWork is about the “Me” and not “We”? No way. Also all the people they interview are not that less insufferable than Adam Neumann, the man they’re accusing of being a fraud. It left me not caring that this man is a fraud. Someone compared it to the Fyre Festival documentary, which is so misleading because what made the Fyre Festival doc so compelling was the real footage of what was happening. WeWork spends most of the time shooting reconstructed office spaces more than anything else. We’re waiting for the big gotcha moment but nothing comes, so you’re kind of left wondering why this was made. It is rushed, contrived and clearly purposefully manufactured to cater to those who are actually fighting to hold people like Adam accountable, it is an obvious attempt to capitalize off of that movement and culture.

SPOILER: The end of this is the absolute worst, where they try and tie it into the pandemic, it’s truly terrible. It’s almost worth watching just for this catastrophe of a closing.