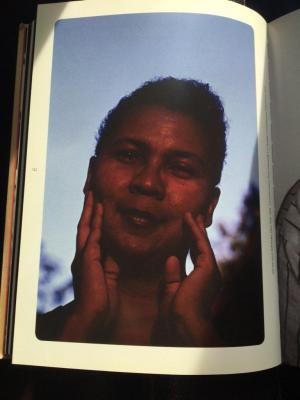 She Rocked My Soul: How bell hooks Taught Me How to Live Fully and Well

I am known as wildly romantic by those who are closest to me. The first person to diagnose me with my condition was my mother. She knew Hollywood had gotten me. How I became lovesick with the love stories they gave me. I kept from her as long as I could so that I was also made boy crazy through what was shown to me on screen and whispered to me through the pages of romance novels I stole from shelves. I always felt loved by the wordless sensorial relationship between my mother and me. If I was sick in the middle of the night, before I would even think to cry out for her, she would swish into my bedroom in the darkness to scoop me up into her arms. She knew what ailed me before I did. The loving care was unconditional. She couldn’t help loving me even when others encouraged her not to and demanded she withdraw her love for me to admonish me for my difference and diffidence. My transition from adolescence into adulthood was troubled. My spirit would not conform to the gendered sex I was born into. My wily sexuality swooned its way out of me and compelled me to take flight. Out in the wilderness I found out just how broken my heart was. I could not go home. My mother came to my first apartment with basmati rice, vegetables and a copy of ‘Rock My Soul: Black People & Self Esteem’. As I said, she knew what ailed me…

Reading that book transformed my understanding of what I had to endure. I wasn’t crazy. I was in pain. It hurt to be told that I was ugly and unworthy so consistently. I was contorting myself into every effort to prove myself exceptional and respectable, but it wasn’t working. I felt disgusting inside. I looked up at my bedroom walls which for years had been festooned with the images of aspiration, glamour and luxury that I coveted. The language was given to me to dissect the core beliefs I had been imbibing unthinkingly. My bedroom walls were proof that I was taking part in my own destruction. Alike Octavia St. Laurent in Paris Is Burning looking up at magazine pictures of Paulina Porizkova, Gisele Buchden, et al. The model of femininity I was aspiring to was one that demanded you be white or at least light, thin as one could possibly be, with facial features that were mathematically aquiline and small enough to be called cute and pretty. It was bell hooks who showed me why it pained me so. She made me aware that my mind could be a glorious place if I wanted it to be. That I didn’t have to declare war on my self and my body. I wasn’t healed – but my journey towards a more conscious and intentional love had begun.

In university, the personal really became political. In our library, I found ‘Feminism Is For Everybody: Passionate Politics’. Lying on the sofa of my new best friend for life’s home in West London, the landscape became newly colourful. Again, I transcended into the most delightfully clarifying reading experiences. Fresh breath was possible after the stifling experience of being twined up into the cobwebs of the dusty arguments of leftist dude-bro intellectuals. They colonised the concept of objectivity and told me I was too emotional and subjective for discussing my life experiences to ever really be considered an intellectual. One by one, my black girlfriends all ascended into black feminist thought and politically, intellectually and creatively left our peers alone in their dust. The winds from across The Atlantic swept us up into collective healing and washed off the obscurity that kept us from our own written legacies. ‘Ain’t I A Woman: Black Women & Feminism’ introduced us to ourselves. Showed us that so much of our thinking had already been done. How could we not build on such solid foundations? One could see schools of black feminist thought, but also paths of liberation that had gifted us these spaces in which we could work and write and rest.

In black leftist feminist spaces over the years to come she was most definitely our oracle. However, when I had succumbed to the worst of my years in active addiction to drugs and alcohol, I couldn’t quite hold on to what she had instilled in me. In ‘All About Love: New Visions’ she wrote that “addiction makes love impossible.” It wasn’t until I recommitted myself to healing from my trauma that I heard her again more clearly. I agreed with her that the fellowship of anonymous recovery groups was one of the world’s largest anarchistic movements for collective healing and recovery. In my renewed relationship with spirituality and community I found the notion of service unto others as immensely nourishing and motivating. She led me here. Dragged me, up and through the truth, into a life worth living.

News of bell hooks passing arrived like ivy creeping up a cold wall. It was too soon. Against her advice, I had just assumed I had time. Time to meet her, time to thank her, time to write in her tutelage and tell the world what she meant to me. My feed was filled with sorrow from my friends Victoria Beckwith, Axmed Maxamed and Frankie Hutchinson. It figured that her passing was transmitted through their posts and tweets and condolences. We had read her work alongside each other, becoming the annoying ones who wouldn’t shut up about injustice at parties where we had once been the appeasing funny ones who refused to learn how to spell codependency. Alas, we did eventually start ripping up the carpets that too much was swept under. Determined to excavate and wash clean. Interrogate and decolonise. Analyse and heal.

So much of the lives we lead today are only because of the work of bell hooks. For me to be a black trans woman who is afforded the bourgeois bohemian space to read and write for a living outside of academia? Virginia Wolfe told us we need a room of one’s own, but only because of bell did the life lived within that room become one of ecstasy and reverie. The book in my handbag right now, ‘Remembered Rapture: The Writer At Work’, sings this to me. She made my mind and my home a sanctuary from which I could birth work, justice and love. From the scorched earth left by trauma and oppression, green shoots of hope and belief sprung. I couldn’t write off all white people or snub all men or give up on black people or mindlessly curse women, gays or trans folks for our flaws. Under her tutelage there was finally a real possibility for everyone to find redemption. I forgave her too. The spliced pronouns she used in her essay on Paris Is Burning left me feeling broiling and stung. To see her decades later in communion with Janet Mock and Laverne Cox was just about enough. To see how far she had come to the point where she could celebrate their black womanhood at The New School talks.

I have lost my favourite English teacher. The one who made a rebel out of me. As all good English teachers do, she made me a lover of all culture, high and low, from the realistic to the fantastical. She handed me whole new worlds and ways to see and look at lives that produce art and the art that produces lives. I knew quite soon into consuming her work that there was no way back. I couldn’t stop seeing the things I was now noticing. Cuddled up on the sofa seeking escape and entertainment, I can no longer turn off my analytical mind. Here I go, analysing all cultural products to see how they reproduce imperialist white supremacist capitalist patriarchy, dominance and hegemonic thinking. Akin to intersectional analysis? Sure! Yet it is more of a hooksienne analysis if you will. It’s not burdensome as such. If anything, I am more voracious for work that is not just well crafted and heart beat raising, but also has the power to transform and reach the sublime. As a writer, she lit a fire under the seat at my writing desk. My taut neck cranes with an urgency. It isn’t lost on us as black people that we always lose our elders too soon. But it’s the work that matters. She has left us with so much work. She worked so hard and so diligently, that it’s now quite possible that through our continual reading of her brilliance, she will live on forever.